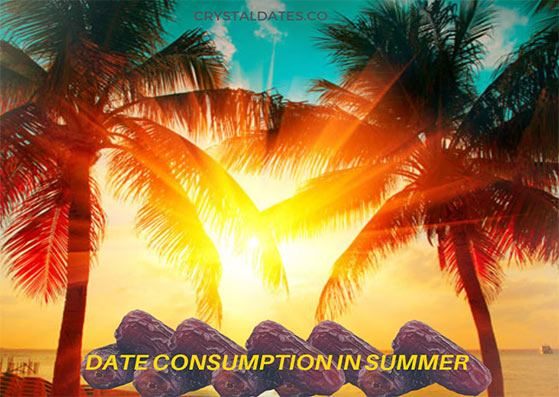 As you know, Fruit Dates, which, according to traditional medicine, have a warm texture, which is usually consumed in summer due to the warmth of the air. Since the summer, people usually tend to consume fruits such as watermelon cool and cold temperament, melon, cantaloupe is, therefore reduced consumption of palm.

Some people also use it for the high nutritional value of the date, consuming it throughout the year. Hence, all of these people also have dinner during their summer months at their own expense.

Reasons to reduce date use in summer

Also, dates Because the fruit that usually increases body temperature, it can be reduced during the summer.

For other reasons, the ending of the dates on the market can be pointed out, since the season is due to the dates of early August, and the summer season is actually the same as the last season of the season.

As mentioned above, due to the start of the winter season, late summer, we are seeing a decrease in the consumption of dates by the people.

In addition to being an important cause of reduced consumption of palm known, poor economic conditions in the summer of 1398 that it dates to a non-commodity basic household basket has made, so that the price of consumer goods Date Not so much

The export situation in summer

Due to the reduced consumption of dates in summer, date exports have also led to a dramatic decline compared to previous years. But this does not mean a complete halt to exports and the export slower process continues.

.You can also read Shahani Dates from Iran .

Other marginal issues that can be mentioned in the export case are the fact that summer exports to Russia continue to be carried out. Given the fact that in the first two months of the summer the amount of picking dates is low and its consumption and purchase will be very low, then the harvest is resumed later in the summer.