Dates producing countries in the world 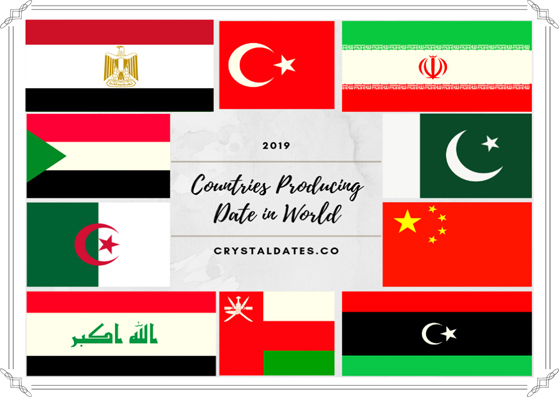 Dates producing countries in the world, in recent years could have a tremendous help to the economy of their country.

Date, this delicious and food in many countries does not have crop conditions due to climatic conditions.

The major palm producing countries in the world, in areas located close together or if they are away from countries that are located in specific geographic areas are located next to each other.

The largest producer of dates in the world are the following countries:

Egypt is the first and largest producer of dates in the world.

In addition to those mentioned, other countries are involved in the production dates.

You can take a look at Iranian Dates Exporter.

Although their date production is not high, it has a small role in the production of dates.

Do you know world-class dates in the world?

These countries include Bahrain, Syria, Kuwait, Chad, Nigeria, Kenya, Cameroon, Mexico, Peru, Spain and Libya are countries that have very little role in the production of their dates.

Due to its tightness and ease of use, as well as low costs, many dates are popular in many countries.

It should be noted though that in the world there are more than three thousand kinds of dates and the dates of any country can have.

For example, our country has about 400 to 600 kinds of dates in Iran, which we still see in terms of conditions that you can not have all sorts of dates.

Many dates are usually produced in the country is common, although there are various kinds of dates that are specific to a country.

For example, dates and dates of Mozafati dates only for Iran, and these dates, even if the seeds are taken elsewhere, do not open the quality of Iranian dates.

For example, the dates of the Mozafati dates originally from Bam city of Iran, but in the cities of Bushehr, Jiroft and other cities of Iran, it is also harmful to these dates. Although the dates of production in other cities do not reach the quality of Bam dates, then this also applies to other dates in the world is also true

In fact, because of the influence of the Arabs in Arabic countries worldwide export conditions better than Iran.

Although the quality of palm production in Iran, the world famous, and many customers date production from Iran prepared, but due to circumstances and pressures other countries and buyer of Iranian Dates Unfortunately, the export in recent years the problems facing respectively.

Food industry in general can be a great help to the economy Considering that hope in the coming years due to improved political relations and the elimination of problems with the export increase, as well as planting dates for domestic manufacturers also improved to increase We will witness the production of dates in Iran.

Our country, Iran, due to the existence of different weather conditions, can be a good place to plant varieties of dates.

However, this requires investment and scientific research and development is also very good profitability, but if you invest the time to invest and will have to producers.