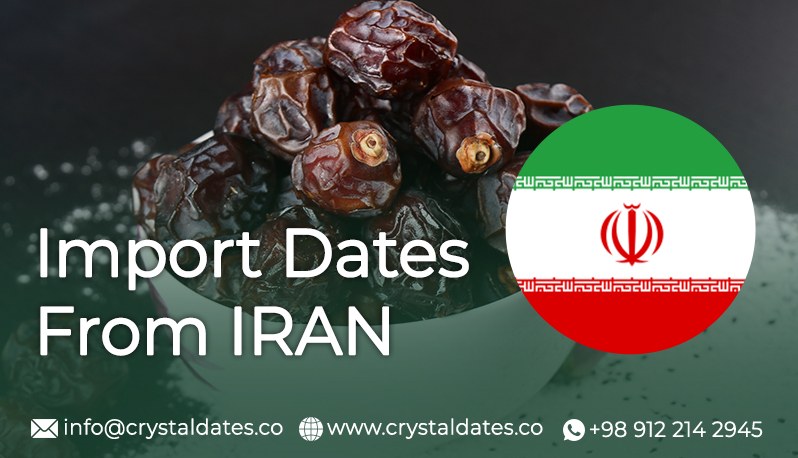 Import Dates from Iran to different countries of the world is done every year in different tonnages.

Iran is one of the decisive countries in the world market for dates because it produces unique dates.

For more information as well as buying Iranian dates you can contact Crystal experts.

A large percentage of these dates in the world are solely for Iran, and nowhere is this date cultivated.

Now it is interesting to know that out of this number of dates produced in Iran, only a few varieties are exported to other countries.

There are also dry, semi-arid and humid dates in Iran that make this date special.

The most famous dates in Iran are: Piarom date, Mazafati date, Sayer date, Kabkab dates, Shahani date and so on.

In what areas in Iran, date is grown?

Climates are generally warm and dry in these provinces, and dates need precisely the same weather to grow.

Mazafati dates, or Kimia Dates that sell well in international markets, are the product of Bam in Kerman province in southern Iran.

These dates are particularly popular among Iranian export dates.

Among Iranian dates, these dates are the most exported.

The  Mazafati is completely black, moist and oval.

The skin and meat of these dates are easily separated and the dates are also quite soft.

Mazafati should be kept in the refrigerator for relocation as well as the appropriate date if the temperature is rapidly crumbling.

India is one of the largest Mazafati dates purposes.

It is also widely exported to Europe and the United States.

Iran is one of the most expensive and most luxurious Piarom dates in global markets.

These dates are cultivated only in Iran and are also known as chocolate and salmon dates in the world.

These dates are luxurious due to the high price, and countries that consume less dates usually import these dates.

Most foreign customers of these dates are European countries.

Unlike Mazafati, Piarom flesh that separated conjoined not.

Piarom dates are light brown color, but the color is reached at this date.

The most favorable type of dates is Haji Abad in Hormozgan province, although it is also necessary to mention the first, second and third grade in Haji Abad, which must also be considered when buying. pay attention .

Due to its high cost, it has been able to make a profit on companies that sell these dates.

Kabkab dates are produced exclusively in Iran, and these dates are one of the export dates that have attracted the attention of foreign countries in purchasing.

The Kabkab are mostly pressed and packed with other dates.

These dates are high in juice and should be kept properly and standard so that the juice does not spoil the dates.

You can contact Crystal Experts to import barbecue dates.

Khassui is also the smallest date in the world.

These dates can be considered one of the cheapest and most delicious dates in Iran.

With its unique taste as well as its ease of use it has been able to satisfy the buyers of dates.

These dates are available in both dry and juicy varieties.

It should be noted, however, that this date is one of the unknown dates even in Iran and many buyers in the world still do not know this date.

You can buy premium Khassui dates from Crystal.

Zahedi dates (qasb) , also known as Zohdi dates, is one of the Iranian dates exported abroad.

These dates are also cultivated in Iraq, but their quality differs from that of Iranian Zahedi dates.

These dates fall into the category of dried dates and are also known as the date palms.

Our company has the ability to supply Zahedi dates with suitable packaging in different weight for export.

Rabbi dates, a product of Sistan and Baluchistan, is one of the export dates.

These dates are produced exclusively in Iran and the rest of the countries do not have Rabi dates.

It has a dull appearance and has a dark brown color.

Sweet and unique taste can be found in these dates.

The country of Dubai and the city of Dubai are home to many date companies and businessmen.

Different dates are often sold in the UAE for sale, and Iranian dates have a hot market in the UAE.

With a branch in Dubai, Crystal can easily supply Iranian dates in Dubai to buyers and also make deals in Dubai.