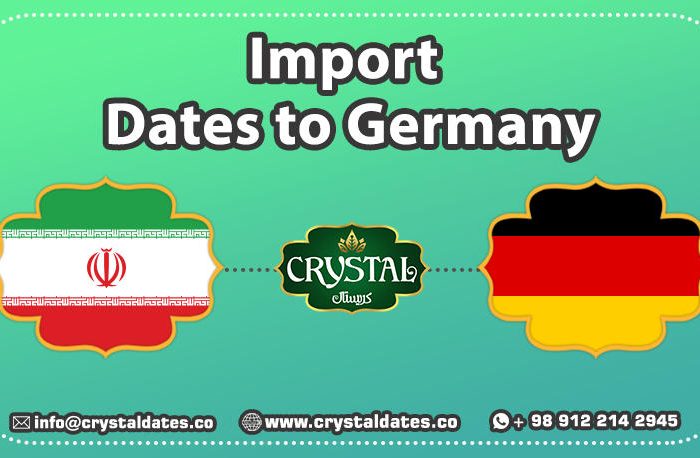 The types of dates that are mainly purchased by European countries are Mazafati and Piarom dates.

Mazafati dates are the most popular and consumed type of Iranian dates in Europe.

Mazafati Rotab has a fine sale in Germany and is considered tasteful in European countries.

It is available in various qualities and packages.

Markets in different countries have a set of standards regarding dates.

Piarom, which is the most expensive type of date in Iran, has a high rate of exportation to Europe.

Piarom dates prepared by our company are a superb and top-notch type of Iranian dates.

The packaging is adjusted to the costumers’ needs and the conditions of the destination countries.

Piarom dates are also known as chocolate or Maryami.

You can purchase Piarom dates at Crystal’s branch in Dubai and then export it from Dubai to Germany.

Most of the consumption of this type of date is industrial.

It is mainly exported to Europe in bulks.

Sayer dates prepared by our company are of the highest quality.

Import of Various Types of Dates to Germany

Iranian dates such as Kabkab, Lulu, Khasoyi, Zahedi, etc. are imported in France.

All of these mentioned types of dates are available in our company.

Various Packaging with an Appropriate Weight

One of the difficulties that foreign costumers face when purchasing from Iranian companies is inappropriate packaging. They usually have unsatisfactory packaging.

Crystal Company has solved this problem by being meticulous in packaging and designing fashionable packages.

The design of the package is of importance.

You can encourage your costumers to purchase by proper design.

In addition to being fashionable and elegant, the packages should be according to standards.

The material used in packaging is also of great importance, and with appropriate packaging conforming food industry, you can assure the health of your costumers.

Crystal Company has provided the possibility of making transactions with common currencies such as the United Arab Emirates Dirham, US dollars, etc.

Crystal Company has branches in France and Dubai and can easily make these transactions.

Currency has always been a great concern of Iranian and foreign companies, which Crystal Company has no worries regarding it whatsoever.

With the help of our branches outside Iran, our company has made it possible to make transactions with LC.

In in-person meetings, costumers can ask for an LC payment method, and Crystal Company would happily assist them.

You can also take a look at Sayer dates .

Proper packaging according to exportation standards.

The only company with a BRC certificate to retail in England.

Possession of 12 national standards of dates.

Possession of all Ministery of Health standards.

The capability of ordering in large scales.

Possession of official permit from Ministry of Industry and Trade and Mines.

And delivery in a short time is another benefit of purchasing from Crystal Company.