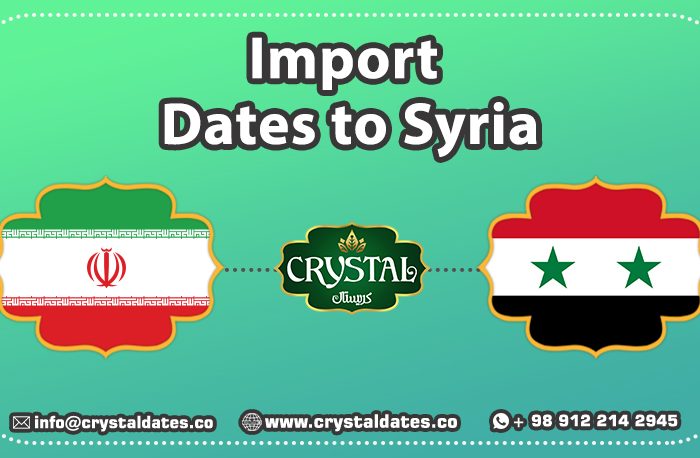 Import Dates to Syria done every year in tonnage.

Syria is one of the date importers in the world.

Also you can take a look at Import dates from iran .

The Import of Mazafati Dates to Syria

Mazafati is considered to be one of the paramount dates of Iran.

This type of date is also known as the Alchemy in the international markets.

Mazafati is a moist type of date, in which peels and insides are two separate parts.

It needs to be stored in the refrigerators.

The birthplace of this type is Bam, and foreign customers usually prefer Bam’s Mazafati.

It is also referred to as the fresh date.

Crystal Company has refrigerating rooms in Bam, and can easily export Mazafati in large scales for the costumers in Syria.

You can also take a look at Import Dates to pakistan .

The Import of Piarom dates to Syria

Piarom, also known as Marian dates, is one of the dry dates of Iran.

It is stretched, and the peels and the insides are not separated.

Piarom is the most expensive type of date in Iran.

The consumption rate of Piarom in Iran is low, and it is mainly exported.

Due to the similarity between Piarom and other types of Iranian dates, foreign customers sometimes mistake them with one another.

Customers of Iranian dates should only purchase from reliable and standard companies so that they would get the best product possible.

You can get the finest Piarom possible from Crystal Company.

The Import of Sayer Dates to Syria

Sayer is an international type of date that mostly has an industrial aspect.

The United States of America manages the grading of this type of date, and it has international standards.

Sayer dates are one of the top-notch types of dates in the whole world.

It is mainly exported in bulks and does not have any sort of packaging.

You can purchase Sayer dates in various grades with a reasonable price from Crystal Company.

The Import of Iranian Dates to Syria

In addition to the mentioned types of dates, you can purchase other types of Iranian dates from our company.

To import dates to Syria, you can easily get various types of Iranian dates such as Kabkab, Zahedi, Majol, etc. from our company.