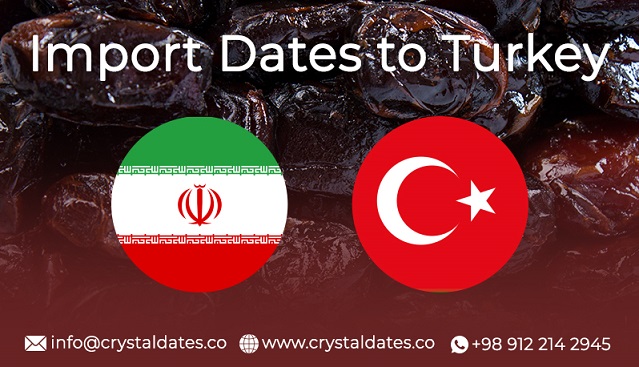 Crystal Company can supply all kinds of dates, including Mazafati, Piarom, Kabkab, etc … to Turkey.

Import of dates from Iran to Turkey

Turkey also has good business relations with Iran because of its neighborhood with Iran.

Dates are one of the products grown in Iran and Turkey has been a regular customer of Iranian dates.

Mazafati dates are usually the most consumed in Turkey, although these dates are of different qualities and are generally considered to be first class Mazafati for import into Turkey.

Transportation by land from Iran to Turkey is also a factor in expanding trade relations, especially in the field of food.

Import dates from Dubai to Turkey

Dates buyer countries usually also have a look at the market in Dubai dates.

UAE and Dubai will be the world’s capital of dates.

Many Iranian dates are also found in Dubai, and business firms as well as Turkish businessmen are usually present in Dubai.

Crystal can supply Iranian dates for export to Turkey via Dubai.

Mazafati has a larger share in the Turkish market among Iranian dates and the taste of its people is also more compatible with Mazafati.

Mazafati dates are also a very important and economical product for Iran as these dates only go to Iran and many foreign buyers tend to buy these dates as well.

Usually foreign buyers in Mazafati may cause confusion.

Crystal that also has a 4,000-ton cold storage in the city of Bam is one of the main suppliers of palm Mazafati.

This helps buyers a lot and they can go to Bam City and Crystal Date Refrigerator to see and check the dates of the dates.

Piarom dates, Iran’s most expensive dates are exported to Turkey every year.

Turks are usually one of the buyers of Piarom. Although the percentage of imports of these dates to Turkey is not comparable to Mazafati, these dates also share in the Turkish market.

Dates usually contain standard packages that are commonly used in buying and selling.

For example, Mazafati dates contain 550 grams, 600 grams, 650 grams and so on. Our company can supply this package to Turkey according to customers’ requirements.

Many companies want to enter specific dates on the packaging supplier to Turkey that it can also be done by Crystal.

Ability to use LC in transactions

The use of LCs in commercial transactions of Iranian companies with foreign companies is usually one of the issues that is problematic due to lack of infrastructure.

Crystal company having offices in UAE and France can easily use the LC transactions and the issue is easily resolved.

Possibility of delivery according to customer requirements

Crystal can deliver dates to customers according to customer requirements as well as FOB or CIF agreements.

Crystal company with years of experience in export to various countries can provide types dates. Crystal has become one of the leading suppliers of Iranian dates in the world by designing attractive and standard packaging. Also, our company has all the required standards and these certificates include Malaysia Halal Certificate, ISO Certificate, GMP Certificate and so on. You can send your request to the email at the bottom of the page.