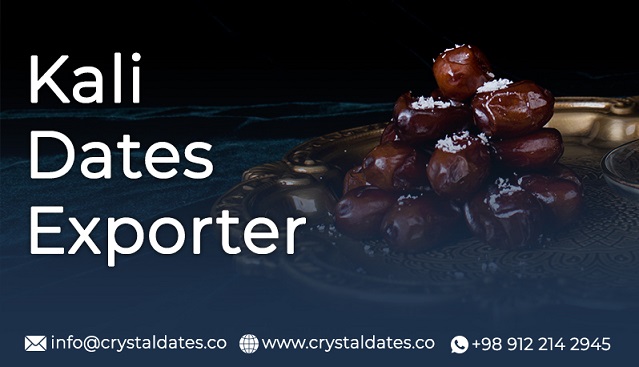 Kali dates are red at first, but when it ripens, the color changes to dark brown and black.

It shares a lot of similarity with Mazafati Dates.

Their taste is also same as Mazafati dates.

They are cultivated mostly in Kerman province.

Harvest time of Kali dates is done in the month of September approximately.

Due to the high quality and relatively reasonable price, this date always has a suitable domestic and international market.

There is a lot of confusion between these dates and Mazafati, always keep in mind that Mazafati price is higher than Kaluteh and they also have small differences in appearance.

They can be soaked in edible paraffin oil.

The most famous Kali dates Exporter in countries such as the UAE, India , Malaysia, Bangladesh, Indonesia, Russia, Europe and etc. is Crystal Dates Company.

One of the most important Persian Gulf countries is the UAE.

Its capital, Dubai shares a close proximity with Iran.

Dubai is known as the world date center.

Many companies in Iran cannot transact in other currencies.

Therefore importers travel to Dubai to find a genuine Kali Dates Exporter who can transact in other currencies such as US dollars, Dirhams, Rupees and etc.

Crystal Dates Company by having a branch installed in Dubai, can make transactions in other currencies, hence it’s a well-known Kali Dates Exporter all across the UAE.

This company can also make transactions through LC.

India as a very populated countries, has a huge tonnage of demand for Kali dates.

Indian people are in love with sweets, especially Kali Dates. Indian importers look for Kali Dates Exporter who can supply Kali dates in a regular manner, without break.

Crystal Company being equipped with a cold storage, can export Kali dates throughout the year, hence it is considered as the best Kali Dates Exporter in India.

Due to the long distance and tropical and warm climate of Malaysia, presence in the Malaysian date market and export of dates to Malaysia requires more planning and knowledge than other countries.

Crystal Dates Company is fully aware of the laws governing the Malaysian market as well as the country’s export and import laws in the field of exports to Malaysia .

Kali dates are supplied through Port Klang which is the largest port in Malaysia, by Crystal dates Company, the biggest Kali Dates Exporter in Malaysia.

Due to good trade relations and the existence of a common religion in the two countries, exports from Iran to Indonesia have favorable conditions.

Exports of dates to Indonesia have also had good and acceptable profits for the country and exporting companies in recent years.

The existence of a long distance between Iran and Indonesia is both an advantage and a weakness, but in any case, we should look at Indonesia and the market in that country as an opportunity and take full advantage of it.

Kali dates are supplied through Port of Belawan in Medan (Indonesia’s busiest seaport), Port of Tanjung Priok in North Jakarta (most advanced Indonesian seaport) and Chittagong, the largest seaport in Bangladesh, by Crystal Dates Company as the main Kali Dates Exporter.

Russian people are in love with Kali Dates, because of its different taste and many health benefits.

Crystal Company being familiar with current import conditions, laws, rules and regulations of Russia, is considered as the main Kali Dates Exporter.

Crystal Dates Company with having all the standards of the Ministry of Health, having 12 national date standards, having 6 International ISO Certificates from Italy, being the only BRC certified company with a retail license in the UK and having an official license from the Ministry of Industry, Mines and Trade is the only Kali Dates Exporter to work with Russia.

For export of these dates to European countries, importers look for a genuine Kali Dates Exporter who supplies these dates in luxury and standard packaging and also has the advantage of soaking them in edible paraffin oil. Crystal Dates Company, being equipped with a packaging unit, has designed the best and stylish packaging for Kali Export to Europe.