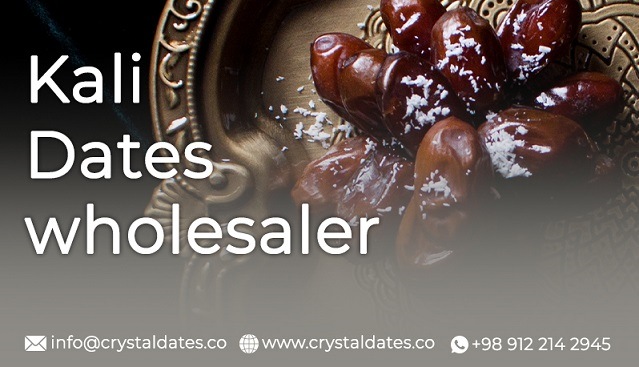 The dates is red at first and turns dark brown or black when fully ripe.

There is a lot of similarity between these dates and Mazafati. Kali dates are drier.

Importers confuse this date with Mazafati, always keep in mind that Mazafati price is higher and they also have small differences in appearance.

Their harvest time is in September.

They are also called as Kalite, Kalute and Karite dates.

Due to the high quality and relatively reasonable price, this date always has a suitable domestic and international market.

The size of this date varies from 2 to 4 cm depending on the type of date.

In Dubai and Europe there is a need for Kali Dates Wholesalers who can supply these dates in stylish, posh and standard packages.

Crystal Company owns a packaging unit, which means this company can design customer’s package and their own desired label.

Russian importers prefer to work with Crystal Dates Company as Kali Dates Supplier because this company has an official license from the Ministry of Industry, Mines and Trade, the only BRC certified company with a retail license in the UK, 6 International ISO Certificates from Italy, 12 national date standards and all the standards of the Ministry of Health. Russia has strict rules and regulations in trading, hence Crystal Company with all these certificate has gained a good position in the best Kali Dates Wholesaler.

India, as one of the most populated countries, knows Crystal Dates Company as a reputed Kali Dates Wholesaler because this company has the ability to provide their services in a continuous manner. Crystal Company is equipped with a cold storage in Bam city, hence they can store Kali dates for yearly use.

Muslim countries such as Indonesia and Bangladesh would like to work with a Kali Dates Wholesaler, who would supply these dates an affordable price, Crystal Dates Company offers these dates on lower price on higher tonnage. Hence if the order is on high tonnage, the price will be comparatively lower.

You can transact in other currencies such as Dollars, Dirhams, Rupees and etc. if you work with Crystal Company, hence it’s one of the few Kali Dates Wholesalers who has this advantage, also this company can transact through LC.

Crystal Company being equipped with vacuum, shearing, strapping and shrink machines, is the best Kali Dates Wholesaler among European importers.

Crystal Dates Company is the only company who has a branch in France and Dubai. This Company with their exclusive packaging meets the needs for Kali Dates throughout Europe by their France Branch. Therefore they are well-known and famous Kali Dates Wholesaler between European countries.

Malaysia being the most important growing market for dates, considers Crystal Dates Company as the sole Kali Dates Distributor as this company is fully familiar with their trade rules and regulations and laws, and has done their studies on Malaysia market.