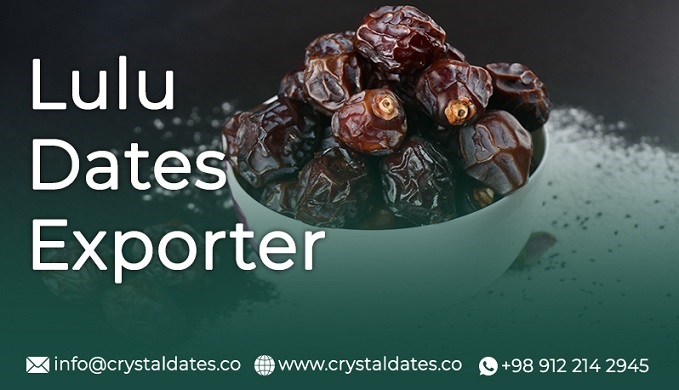 Lulu is one of the dates produced in Iran that has a taste similar to Piarom dates .

These dates are also called as Alooyi dates.

This date is widely consumed in Arabic and European countries.

This date has easier storage conditions than other dates.

One of the interesting features of this date is that it has a small seed compared to its large flesh.

These dates have a very small market share in the world and are lesser known dates.

Due to its special taste, this date can have many customers in the markets of European countries.

Crystal Dates Company is the only Lulu Dates Exporter in countries such as the UAE, India, Malaysia, Bangladesh, Indonesia, Russia, Europe and etc.

Dubai is known as the world date hub.

Lulu dates are not widely available.

Hence many importers travel to Dubai to find this date. Crystal Dates Company which is a prominent Lulu Dates Exporter, supplies these dates through LC.

This company can make transactions in other currencies as well, such US Dollars, Dirhams, Rupees and etc. which is a plus point for many importers.

Crystal Company as a branded Lulu Dates Exporter, supplies these dates to India in proper packaging.

By having a cold storage in Bam city, Crystal can supply these dates at any time of the year, hence it is regarded as a distinguished Lulu Dates Exporter in India as well.

There is a big distance between Iran and Malaysia.

Malaysia has warm and humid climate.

Export of Lulu dates to this country needs more planning and knowledge than other countries.

You can refer to Crystal Dates Company as an experienced Lulu Dates Exporter in Malaysia as it is fully aware of the laws governing the Malaysian market as well as the country’s export and import laws in the field of Lulu exports to Malaysia.

Lulu dates are exported through Port Klang which is the largest port in Malaysia by Crystal Company as a qualified Lulu Dates Exporter.

Indonesia and Iran have good trade relations, and the existence of a common religion in the countries, have made export of Lulu Dates very easy.

Lulu Dates Exporters make good and acceptable profits from export for the country in the recent years. The existence of a long distance between Iran and Indonesia is both an advantage and a weakness, but in any case, we should look at Indonesia and the market in that country as an opportunity and take full advantage of it.

Muslim countries such as Indonesia and Bangladesh, order a huge tonnage of dates for the holy month of Ramadan. Lulu dates constitute a portion of these dates.

Crystal Dates Company as a well-known and experienced Lulu Dates Exporter, supplies these dates to Indonesia and Bangladesh with a competitive price on huge tonnage order.

Crystal Dates Company as an effective Lulu Dates Supplier, supplies these dates through Port of Belawan in Medan (Indonesia’s busiest seaport), Port of Tanjung Priok in North Jakarta (most advanced Indonesian seaport) and Chittagong, the largest seaport in Bangladesh.

Lulu dates are mostly exported to European countries and Russia, because of its different taste.

Crystal Dates Company with having all the standards of the Ministry of Health, having 12 national date standards, having 6 International ISO Certificates from Italy, being the only BRC certified company with a retail license in the UK and having an official license from the Ministry of Industry, Mines and Trade is a knowledgeable Lulu Dates Exporter to work with Russia.

Crystal Company being familiar with current import conditions, laws, rules and regulations of Russia, is considered as a skilful Lulu Dates Exporter.

European countries such as Spain, Italy, Germany and France, are very particular about any commodity packaging. European importers prefer to buy Lulu Dates from Crystal Dates Company as it has a branch installed in France and also is equipped with a packaging unit.

Crystal Company, as the most preferred Lulu Dates Exporter, designs the most stylish, fashionable and standard packaging for Lulu Export to Europe.

Crystal Company as the expert Lulu Dates Exporter in Europe, also has a branch installed in France who can meet the needs of European countries such as Spain, Italy, France, Germany etc.

In the last few years, the date market has changed from a monopoly market to a competitive market.

Egypt, Iran and Saudi Arabia are the top three date producers in the world, constantly competing for a larger share of the global date market.

In the future, exporting countries as well as companies will have fierce price competition.

This helps a lot of buyers to choose the most suitable price to buy.

Also, agreements in the field of customs, such as customs clearance and coordination between the two exporting and importing countries, can increase the import of dates.

Due to the situation of Iran’s currency against other countries, dates are a very economical food that will bring acceptable profits to foreign buyers.