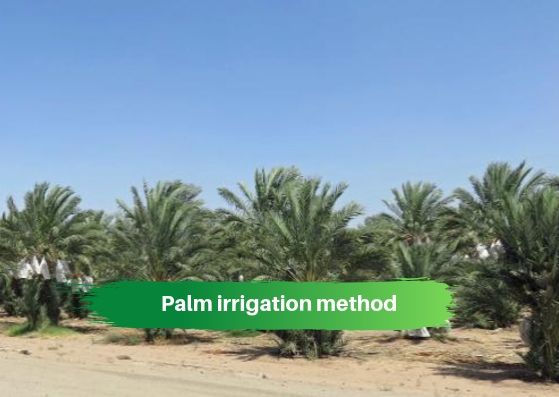 Iran is one of the world’s arid and semi-arid countries due to its low geographical location due to low rainfall and inappropriate temporal and spatial distribution of rainfall. The average annual rainfall of around 250 mm which is equivalent to a third of the average rainfall in the world.

While the average size of a country’s total water supply is fixed, the demand for water due to the high population growth, agricultural expansion and development of the industry is on the rise. Date palm is one of the plants with high water requirement, so that the net irrigation requirement is estimated to be up to 3 m3 per hectare. Water and irrigation for dates directly or indirectly play a role in the production process and consequently in quality and quantity, price and export of this product. Although palm trees are known to tolerate environmental stresses such as drought and salinity, they need sufficient water and good quality to produce an optimal crop. Currently, about 90 percent of the land of palm trees, fertile) Country irrigated farming, and nearly 96 percent of dates from the lands of income, in other words, only about 4 percent of the total production of dates in the country of land under cultivation in rainfed would take place.

Therefore, it is almost impossible to produce dates in the country without irrigation because the share of production from dryland is very low and secondly to climate conditions which have been highly volatile and unstable in recent years. Therefore, water is the first and most important factor limiting the production of dates in the country. In addition to water quantity, water quality issues and the principles of non-use of existing water resources is also production problems in areas prone dates

In general, the existing problems in the country’s irrigated groves can be mentioned the following

3.Use of poor quality water

The water crisis in recent years has given the government and farmers serious attention to the optimal use of limited water resources, in addition to focusing on optimizing conventional irrigation methods, focusing on advanced methods of gravity irrigation and pressure irrigation to increase yields

However, before selecting the irrigation method, it is necessary to conduct comprehensive studies on the adaptation of the irrigation method to the crop conditions in each area and to prepare a justification for it. There are several methods for watering plants and horticultural crops that not all the methods used to irrigate palm. The most common methods of palm watering are the following with the advantages and

Surface irrigation is the oldest irrigation method in most parts of the world. This method is based on the condition of soil, water, land and farming experience in different ways, such as basin irrigation, strip and groove done. Surface irrigation can be one of the proper methods if properly designed and implemented, because of the need for special equipment. But this method does not run well, if irrigation, waste water, lack of uniformity of water distribution and reduce product to follow. The advantages of these methods are simple irrigation method, low initial capital requirement if the land is flat and low cost of running the system and their disadvantages can be excessive water consumption, relatively high manpower requirement and high cost. He outlined the rhetoric on rough terrain disadvantages of each method.

This irrigation method is the oldest and most common method of palm irrigation used by humans around the world. The land plot is usually rectangular or square and its surrounding territory is surrounded by small ridges. The surface of the plot inside the plot is flat, so that when it entered the water, the surface of the plot was submerged to gradually penetrate into the soil. In this way, it is enclosed around palm trees by stacks of 1 to 2 cm high and watered for the required time. The higher the flow, the larger the Kurds can usually be considered. Also, if the plot size is large, it will take longer to distribute water over the soil surface, resulting in a greater penetration depth.

In this irrigation method, leveling of the soil is very important, it can be used for both newly cultivated and fertile palm trees, in newly constructed palm trees, the width of the strips is 0.5 to 5 meters and height. The strips are 2 cm long and the trees are in the middle of the strip (Fig. 1), the strips vary according to the soil texture, the slope of the soil and the amount of water available, the stripe width gradually increasing as the trees age. They reach about 2 meters. Then strips come complete plot or replaced by other methods. The principles of this method are the same as the Crete irrigation method, which has been modified to reduce some disadvantages and thus improve its efficiency.

In this method of irrigation, water does not flow over the entire surface of the soil, but rather through narrow furrows called grooves, gradually penetrating the floor and works of groove, moistening the soil. Fluid irrigation can be applied to a variety of soils. However, the shape and length of the grooves and the distance between them should be appropriate and well managed to achieve the desired result. This method can be applied at different stages of palm In the early stages of growth, usually on one side of the furrow at planting trees is considered to be that over time this practice by adding a furrow on the other side of young trees is completed. In fertile gardens, the surface is split between rows of trees with furrows at a distance of 70 to 90 cm and the nearest furrow to the date palm trunk is about 40cm. growth from planting of saplings to fruiting stage.

Basin irrigation method is suitable for watering palm in different soils. In this method it creates a pallet around the tree whose dimensions vary depending on the texture of the soil, the flow rate, and the age of the palm tree. In the first pan diameter of about a meter that gradually increases. The watercourse that is built between two rows of palm trees and sometimes near the rows of pots, supplies and distributes the water needed for the mattresses. The pan irrigation method is the best and most common method of surface irrigation for the country palm trees.

One way to irrigate palm trees is to use river tides. Tidal irrigation is done by the main streams that are natural and the side streams being constructed by the palm trees. These streams act as irrigation canals in the course of fashion and as drainage channels in the tide. In Abadan city, palm trees are irrigated by the tidal waves of the Arvand and Bahman Shir rivers, which are subjected to the Persian Gulf tides. One of the major problems with irrigation in Abadan is dehydration, degradation and salinity of Arvand and Karun rivers. This method of irrigation is a traditional low cost method and is used in other countries such as Iraq for irrigation of palm trees and in Indonesia and Gambia for irrigation of other crops

Micro irrigation with topical irrigation applies to all irrigation methods in which water enters the root growth zone in a small amount and is therefore termed as low volume irrigation. Micro irrigation methods were first used in the UK greenhouses in the late 1980s, with the development of the plastic industry during World War II and subsequent years, making the use of plastic pipes for irrigation economical. Micro-irrigation methods are basically divided into three groups: the subsurface, surface and air. In the subsurface group, water is withdrawn from the pipe or by dropper to enter the root zone directly. Another group of irrigation crops are surface types in which water is poured onto the soil to gradually penetrate and soak the root development area. In crop irrigation, such as bubble irrigation, water is not poured directly onto the soil, but rather spreads inside the vegetation on top of it and slightly above the plant surface. This allows the water droplets to spread to a wider area of the soil and penetrate the ground. The advantages of this method of irrigation can be as high irrigation efficiency, enabling the use of fertilizers and pesticides with irrigation water, control weeds and require less manpower and disadvantages of the high initial investment cost and the risk of clogging output.

In drip irrigation, water is received from a mercury source and then pumped through a network of pipes and fittings to be dispensed through a device called a dripper and provided to the plant. The most important advantage of drip irrigation over surface and sprinkler irrigation methods is to determine the water content of each tree. Drip irrigation systems are mainly used for fruit trees because of their high cost, as these plants remain in the ground for a long time, making it possible to invest in and install the drip system. On the other hand, the water requirement of these plants is high and any water saving enables the cultivation area to increase. According to research conducted so far in Hormozgan, Kerman and Fars provinces of Iran, water use in Piarom and Mazafati cultivars (in vegetative stage) and Shahani Jahrom cultivar (in reproductive stage) were 10000, 500 0and 4600m3, respectively.