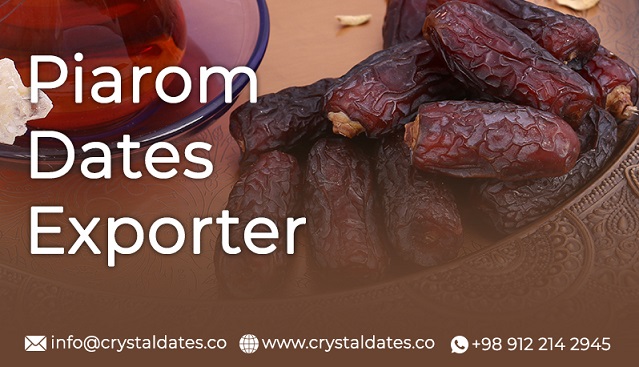 Piarom dates is the most luxurious dates.

They are considered as fruitful export dates.

They are the most expensive dates in the globe.

Exporters make a lot of profit selling these dates. They are commercial dates.

They are called as Maryami dates in India and other countries.

These dates are dark brown in color.

This date is also one of the best dates in the world and Iran.

The moisture content of Piarom dates is 17%, which is why it is considered as one of the semi-dry dates.

Their skin and flesh stick together which gives a luxurious appearance to them.

This feature helps these dates to be easily washed.

To order these dates in bulk quantity, you can have better price and it can be more affordable.

These dates are also called Chocolate Dates due to their appearance and taste.

Piarom dates are packed in matchboxes of 450 g and 5 kg bulk.

These dates are often sheared or strapped.

The packaging of this date should be completely luxurious and standard in accordance with European markets.

You can name Crystal Dates Company as the chief Piarom Dates Exporter in countries such as the UAE, India, Malaysia , Bangladesh , Indonesia , Russia , Europe and … .

One of the important Perisan Gulf Countries is the UAE. The capital of the UAE is Dubai. Iran and Dubai are very close to each other.

Dubai is the world’s date center. Crystal Dates Company is a well-known and famous Piarom Dates Exporter in Dubai, as it has a branch installed in Dubai.

This company can make transactions in other currencies such as US Dollars, Dirhams, Rupees and etc.

which is the criterion for a good Piarom Dates Exporter among importers in Dubai.

India is one of the most populous countries. India has many festivals during the year because of its muli culture and religions. During these festivals, there is a lot of demand for luxury dates such as Piarom.

Indian importers prefer to choose a Piarom Dates Exporter whom they can work with all along the year, who can supply Piarom date regularly.

Crystal Dates Company is such a company, as it has a cold storage located in Bam city.

They can store Piarom dates up to a year or maybe more under a fixed temperature.

Crystal Company being fully familiar with import laws, trade rules and regulations and having complete knowledge of Malaysia Date market, is regarded as a genuine Piarom Dates Exporter in Malaysia.

Malaysia has been developing in date import over the past few years because of its Muslim population.

Crystal Dates Company as the main Piarom Dates Exporter in Malaysia, supplies these dates through the Port Klang which is the largest port in Malaysia

There is also a portion of Piarom dates which is exported to Bangladesh and Indonesia.

Crystal dates Company exports Piarom dates to these countries in bulk quantities which can have a lower price compared to package.

Hence this company is regarded as the fairest Piarom dates Exporeter as it supplies Piarom at a reasonable price which is favored by many importers.

Crystal Dates Company as the sole Piarom Dates Exporter, supplies these dates through Port of Belawan in Medan (Indonesia’s busiest seaport), Port of Tanjung Priok in North Jakarta (most advanced Indonesian seaport) and Chittagong, the largest seaport in Bangladesh.

Russia is a very cold country.

Consumption of dates have become a habit between Russian people as it has a hot nature.

Crystal Company has lot of experience in this matter.

Crystal Dates Company with having 12 national date standards, having 6 International ISO Certificates from Italy, having all the standards of the Ministry of Health, being the only BRC certified company with a retail license in the UK and having an official license from the Ministry of Industry, Mines and Trade is the only Piarom Dates Wholesaler to work with Russia.

European importers would prefer to work with a Piarom Dates Exporter who would supply these dates in the most luxurious and standard packaging.

Crystal Company is the sole Piarom Dates Exporter who has a branch in Dubai and France.

Crystal Dates Company as a well-known Piarom Dates Exporter throughout Europe, owns a packaging unit which can even print customer’s own label on the package.