Turkey is in 4th place in buying Iranian Dates 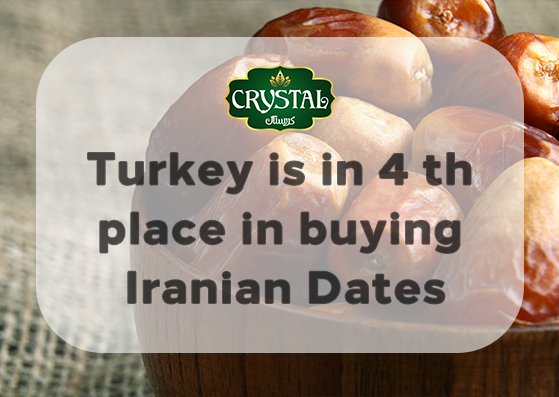 Turkey, the official name of the Republic of Turkey, is an Eurasian country with large parts of the country – Anatolia or Asia Minor in the northwest of Asia and the Middle East, and a small part called Thrace in the Balkan region (a region in southeastern Europe.

* Turkey is a mountainous country with relatively high rainfall.

* The shape of this country is like a rectangle stretching from the east and west.

* It has good, flat weather and places of interest and spectacular and tourist.

You can also read Maryami Dates .

Turkey is located in one of the sensitive areas of the world, which has a very strategic geographic location and is also considered the north-west and south-west of Europe. Therefore, many countries, especially Iran, use Turkish territory for the transit of goods and energy.

Turkey is in the east with Iran, Nakhchivan, Armenia, and Georgia; Southeast with Iraq and Syria; and in the northwest (European part) with Bulgaria and Greece. Turkey from the north to the Black Sea, from the West with two small Sea of Marmara and the Aegean and Mediterranean sea border with the South West there. The two strategic straits of Bosphorus and Dartnell are also available to Turkey

It can be said that the Turkish economy is a mix of domestic industries and new, so every day is added to the domain. In 2005, the Turkish agricultural industry ranked seventh in the world with its production, and in the end it generated 11.2% of the population in Turkey in 2006. It should be noted that since the private sector is very strong and fast growing Turkish economy is, therefore, very important role in the banking, transport and communications. In recent years Turkish economy has grown well and has grown by 8.9% and 7.4% in 2004 and 2005 respectively.

Dates are one of the export commodities that have played a very important role in the Turkish economy. Since Turkey is one of the top buyers, it has been in the process for the last several years to be the fourth most successful buyer in the world.