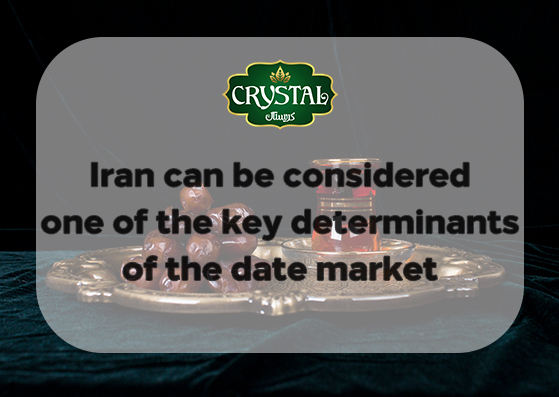 It can be said that cultivating varieties of dates in Iran do not go anywhere in the world, and this helps a lot to the economy of the country. There is also a variety of types of dates in Iran, encourage buyers to buy more dates by dates, countries Iran.

We want to explore the role of Iran in the world’s day-market, stay with the Crystal Date Company blog.

In the global market, Saudi Arabia, Tunisia, Egypt and many other countries besides Iran are present. In this regard, if the dates of Iran for a period of time is not consumed among people in a region, it can easily be replaced by other countries. The Iranian competitors with knowledge about Iran’s position in the production of palm dates are waiting for an opportunity for Iran’s position in the market

What are the basic prices determined?

Iran dates and prices as well as other countries consider international prices. For example, when the global price of the Mazafati date is assumed to be $ 4, so all Iranian traders would have to deal with the same price at Mazafati. The rise in Iran’s date prices in recent years is well illustrated by Iran’s share of the palm market.

You can take a look at buy best Iranian dates .

Of course, it should be noted that marketing and joint business meetings can make Iran’s dates a major commodity in the import basket of other countries

Do all countries buy dates from Iran?

The only difference that distinguishes Iran from other countries is the taste of Iranian dates, which is very unique and can be considered unique in the world.

The issue of large-scale sanctions by the United States has made such a bad situation in the global market, which can be said to have been one of the main reasons for the Iranian businessmen to easily and freely interact with all the countries of the world, which, on the other hand, importantly, foreign exchange earnings from these deals easily be injected into the economy.