Method of thinning and arrangement of date clusters 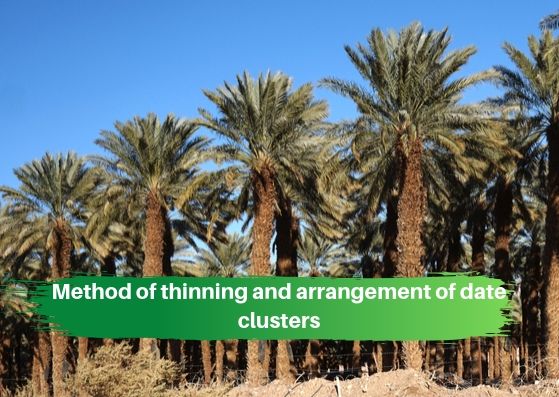 Fruit thinning operation, enhances the quality of most fruit trees, fruit enlargement, reduction of technological and physiological balance between vegetative and reproductive parts of the plant. In palm dates, fruit thinning is important to prevent salinity, increase fruit quality and increase its size. But sometimes this action reduces crop yields, especially in wet areas, and increases the percentage of black nose contamination. However, the thinning practice is used in most parts of the world.

In Iran, since a significant portion of the palm production dates are consumed locally and domestically, palmers tend to have the highest production possible. Because of this, thinning is less prominent and only removes one or two weak clusters when the crop is very good and there are at least 1–2 clusters on the palm.

In general, the main reasons for thinning the palm include:

– Reduce the phenomenon of fruit spoilage, especially in humid areas with increased ventilation within the clusters

– Increase the speed of fruit ripening and improve their coloration (an experiment carried out overseas by accelerating fruit ripening to control for up to 3 days).

Thinning of fruit is done in three ways:

The conventional method of thinning in areas prone dates, number of clusters is completely cut off. This method is based on Leaf | Bunch Ratio.

The famous date expert Zaid (1) reported the most appropriate leaf-to-cluster ratio for most palm cultivars with about 2 leaves to one cluster.

Two points are essential in reducing the number of clusters:

2 – Observe the balance of the clusters on the tree (the weight of the leaf to the cluster).

He also suggested that the first year of date palm production, one cluster, the second year two clusters, the third year to maintain three clusters, and continue this process until the formula is reached in the years of economic growth. In the case of Iran, the palm trees typically remove all the clusters that appeared in the first two years to reinforce the tree, and the following year a limited number of clusters (1) are kept on each palm.

Dawson also believes that in the first three years of fruiting any cluster left, then in the fourth year one or two and in the fifth year three or four clusters on a palm tree maintenance and proportional to the increase in the number and size of leaves, the number of clusters Also added, to reach its maximum annual output in terms of palm varieties and growth conditions at 2 to 5 years of age.

Bunch thinning operation can be performed in the following ways.

2-6 Remove one-third of the end of the cluster at the time of the pollination operation applied to tall piglets.

1 – 2 – Remove one third of the end of the cluster in the Kimmerian phase.

1 – 2 – Remove one third of strands from central bunches

One-third of the central strands are eliminated in the chimeric phase (6 weeks after pollination). In this way, it is important to ensure that the strands do not break. This can cause fungal attack and dry the whole cluster. Therefore, the cut-off should be done at a distance of 1–2 cm from the base of the strands. This method applies to varieties with short strands.

Hand thinning is the best way to reduce fruit thinning, but this is a very costly method, except for some rafts. Coarse-grained ones, such as Mojul cultivar, are not economically viable, and the method used in most cultivars is to shorten the clusters at pollination and remove some strands about 6 weeks after pollination.

One of the important points about choosing the method and timing of date fruit thinning is to pay attention to the timing of the emergence of important pests and, in the first place, date fruit. For example, in areas where moth damage is more than 10 percent have thinning operations after the end of the first and second generation pest damage was done. However, in areas where the pest is present and its damage is less than 10%, there is no need to fight the pest. Because in this case the action of natural thinning by this insect is optimally performed.

Arrange and close the date cluster

Cluster arrangement and closure must be performed immediately after the date cluster thinning operation. When performing this operation, be careful not to break the cluster axis while lowering the cluster. The arrangement of the clusters is performed in different ways in different date zones of the country. Zaid (1) stated that each cluster should be maintained by two ropes, one fastened to the lower leaf of the Baloviki leaf.

Cluster arrangement is typically performed on long-tailed cultivars such as Mazafati (Jiroft and Bam), Dagahat-Noor and Borhi (Khuzestan). But the figures with very short cluster tails, such as Kundegr in Bandar Abbas with Khuzravi and Khuzestan in Khuzestan, do not need cluster arrangement. The clusters of most cultivars are intermediate between these two types. Intermediate, at the beginning of fruit growth, when they are still green and fall into a cylindrical spherical state.

Arranging and directing clusters on dates, especially in tall and heavy clusters, is a common practice of palm trees. When arranging the clusters and closing them, the clusters should be pulled out of the inner part of the crown and directed downwards to the tree, and usually avoid using the rope (preferably hemp or fabricated) to prevent the cluster axis from breaking. (From the palm leaf) to the petals. In cases where plastic ropes have been used to close the clusters, wounding of the cluster’s tail with the pigs is due to the penetration of such ropes into the tissues.

This method applies to Pabland cultivars such as Mazafati in Jiroft, Bam, Kohnuj and Haji Abad regions of Hormozgan and Barahi in Abadan. In this way, the bunches of dates are bent downwards and they are collected around the trunk of the tree and then tied with a rope.

In some areas, during pruning, the leaves typically cut 4-5 rows from the lower leaves of the tree crown at a distance of 1–2 cm, leading the clusters downward by creating a V-shaped cleft in the petiole. The tail is carefully inserted into the slot.

In this case, the clusters should be separated from the top leaves and relied on the nearest older leaf at the bottom. In very young trees, sometimes under the leaves on which the cluster is placed, the caretaker.

The clustering and closing operations should be performed after thinning (1–2 weeks after pollination) and when the fruits have gained about one-third of their original weight.